Twice-baked potatoes are a fancy side dish that pairs beautifully with any meal.  Crunchy tops with creamy, tangy potatoes underneath make this double baked potato a popular choice for special occasion steak dinners at home!

What is a twice baked potato?  It’s exactly what it implies.  It’s a potato that is double baked to get a delicious, creamy potato served in its own skin.  You bake it to cook it from a raw state to a fluffy texture.  Then after adding in things for additional flavors, you bake it again to get a crunchy outside and a creamy inside.

What makes this double baked potato recipe the best one?  These potatoes have a crispy flavorful shell, a crunchy top from the second bake but inside is a tangy, creamy potato that melts in your mount.  Full of butter and sour cream, they pair beautifully with any special occasion meal.

CHECK OUT THE VIDEO BELOW IN THE RECIPE CARD SHOWING HOW EASY IT IS TO MAKE CRUNCHY, CREAMY TWICE BAKED POTATOES!

I’ve got all the information for you on this delicious side dish and by the time you get to the end of this post, you’ll know all the low down on making the best twice baked potato recipe ever!  I’ll answer all the questions like:

What potato should you use for baking?

To start let’s talk about selecting the right potatoes to use for baking.  The best baking potatoes are russet potatoes.  They have high starch, low moisture and after baking, they are light and fluffy.  That’s exactly what you are looking for in a twice baked potato.  While you will add wet ingredients for flavor, you do want the potato to finish light.

PRO TIP:  To get the crispiest skins you’ll want to rub the russet potatoes in olive oil then generously season with salt.  The salt helps draw out the moisture and the olive oil gives some added flavor.

Need more ideas for what to serve along side your meal? Find all the SIDE DISH recipes you need here!

All the other questions you might have when making stuffed potatoes?

Do I need to do anything special if I make the twice baked potatoes ahead of time?  No special things, just be sure and store them in the fridge, sealed and covered until about an hour before doing the second bake.  Allow them to come to room temp before the broiling.  It may require some additional time in baking if they sit in the fridge for a long period of time.  Carefully make sure they are hot throughout before serving them.

I don’t own a potato ricer, what can I use instead?  No problem at all.  You can use a fork or a potato masher to remove all the lumps for the stuffed potatoes.  It’s tempting to use a hand mixer, but that will make the potatoes really gummy and heavy.  Still with a fork or masher!

I’m in a hurry can I make these any faster?  You can cut down the baking time on these side dish potatoes but doing the first bake in an instant pot or in a pinch you can microwave them.  In both of these cook methods, I would still use salt to help keep the shells crispy, but they will not be as crispy as they would be if they are baked in the oven.  That being said, they still taste wonderful!

How can I make this “company worthy?”  Want to step up your entertaining presentation.  Instead of just spooning the filling into the potato jackets place the stuffed potato filling in using a piping bag.  You’ll want a tip that has ridges on it to get some added crunch.  If you don’t have a piping bag you can use a ziplock bag with any pastry tip.

Want even more flavor in your twice baked taters?  Add cheese and bacon into the mashed potatoes before filling the shells.  You can also place flavored compound butter on top like this steakhouse butter or this cajun butter?

As you can see twice baked potatoes work great with casual meals for entertaining and also with fancy meals.  I’ve included 2 halves for each person in the recipe, because I guarantee people will want more than one.  This recipe is easily adapted for more…. and I suggest you make more than what you need for dinner as they heat up well for the next days lunch too!

STAY CONNECTED ON SOCIAL SO YOU DON’T MISS OUT ON THE LATEST RECIPES TO MAKE ENTERTAINING BOTH STRESS FREE AND DELICIOUS!

If you are making these ahead of time, remove them from the fridge an hour before baking to allow them to come to room temperature.  Bake at 400° for 15 minutes to warm, then raise the temp to broil and follow the broiling instructions in the recipe.

Looked this up to get crispy outside part. A friend and I accidentally bought French Onion dip instead of sour cream years ago for twice baked; best ever mistake! Takes flavor to a new level.

I made these potatoes for company on Sunday and they thought I was a gourmet chef! I couldn't believe how easy they were!

Oh yum! I will have to give this a try!

Why do I do this to myself and look at yummy food at night? WHY?!! this looks so good! 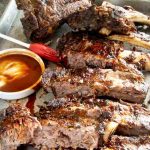 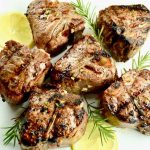