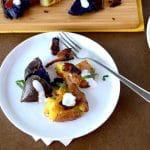 The smaller the potatoes are the better. Larger potatoes will work, but you want the pieces to be bite sized when serving. Fingerlings work as well as any tiny potatoes.

You can boil potatoes and prepare ahead of time. After boiling, go ahead and slightly smash the potatoes and place in a bowl in the fridge for use when needed. Take potatoes out when you start preparing bacon so they can come closer to room temperature before baking. Smash the potatoes fully on baking sheet after you have browned the BBQ bacon.

These work as both a hearty appetizer or as a side dish.